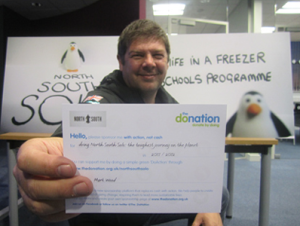 It’s always been a bit of a mystery to me why us humans get such a thrill from pushing ourselves to our absolute limits. Given the world of sponsorship that I work in, I get to see a lot of it – whether it be cycling around the coast of Britain or playing the guitar for 24 hours straight.

But this one takes the biscuit.

For the last three years, Mark Wood has been planning an epic expedition to be the first man ever to ski solo and unsupported to both the South and North Poles, back to back. In just three weeks he’ll start turning these plans into action.

Only seven people have ever made it to the South Pole solo and unsupported; a mere two men can say the same for the North Pole. This is one mighty, cold, lonely, and dangerous challenge that Mark’s taking on.

So why would he do such a thing?

I think I’m right to say he has three reasons:

So given this last reason, we were pretty happy have a chance to introduce ourselves to him last month, and are even more stoked that he decided to use The DoNation to raise sponsorship for the almighty challenge.

Meeting Mark has been a real inspiration: he’s a nutter, but a regular nutter. To think that this very normal bloke is about to embark on such an unimaginable adventure really makes you realise that anything is possible when you put your mind to it. Each time we chat I’m left with an intense appetite for another challenge.

And so, it seems, was Emma. Emma Murphy is the director of Life Size Media, who are (very kindly) doing the PR for The DoNation and Mark pro bono. Having heard all about Mark’s challenge, Emma was (naturally!) going to sponsor him with a DoAction, and her DoAction of choice was Fantastic un-plastic.

But cutting out plastic packaging for two months wasn’t enough of a challenge for her. No, Emma decided to cut out all plastic for an entire day. OK, so it may not be the same kind of challenge I had in mind (like cycling to Greece), but I think we were all surprised by just how tough it was. From the light switch to the tube to the loo seat and elastic in her underwear, she soon realised that plastic is absolutely everywhere, and avoiding all contact with it makes modern life pretty darn tricky.

Hopefully Emma’s plight will have shone a light on our plastic addiction, and will give some extra motivation to all those who sponsor Mark with the regular ‘fantastic unplastic’ pledge of simply cutting down on plasticpackaging.

I look forward to seeing who else is inspired to ‘do’ by Mark’s epic challenge; no doubt they’ll be pushed to compete with Emma though…