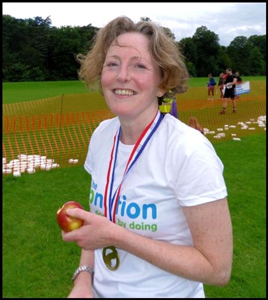 Polly only heard about The DoNation in May; since then, she’s not only Done the Wycombe Half Marathon but also convinced a friend to run it with her for The DoNation. One of her sponsors, Rick Webster, went on to raise his own Dos for the Manchester 10k and was Doer of the Month in May. As though that isn’t enough Doing, she’s also created our latest DoAction for us – Lag your loft.

Anything else we should know?!

I have no idea why but “Total Eclipse of the Heart” is my motivational theme tune.

A bit about your challenge:

What were you raising sponsorship for?

How did it go?

This is the second year that my running buddy Suze and I have done the Wycombe Half and it was the driest day we’ve had in weeks – hooray.

Every time we do one of these half marathons we learn something new, this time it was that we need to have something to eat at ten miles to keep our strength up through to the end.

Why did you decide to raise sponsorship through The DoNation?

I saw Hermione speak at an event about social entrepreneurs and was inspired. I am not keen on asking my friends and family to sponsor me for money, however good the cause, but asking them to do something felt fine.

How did it make you feel?

Righteous 😉 and it did help to get me out there and doing my thing. I have not been able to train as hard as I should in the weeks leading up to the run and was tempted not to do it, but having the sponsors meant I couldn’t pull out.

Are there any top tips you’d share with someone else raising sponsorship?

Once upon a time I was falling in love but now I am only falling apart.

You can still sponsor Polly for her half marathon here.