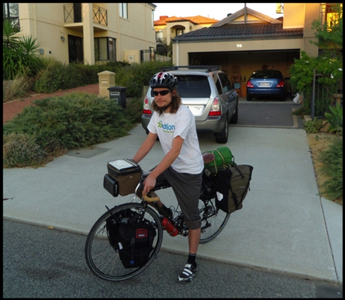 This is a guest blog from Nick Soukek, Doer of the Month in March 2012 and winner of the ‘Most Committed Doer‘ award 2012. Here is Part One of his account of his incredible cycle ride from Perth to Adelaide.

For all intents and purposes now a Brit, Nick is originally from Australia.  At the age of twenty eight, seventeen years since moving out of Australia, he found himself trying to imagine how he could re-encounter his home-country in a way that not only opened his possibilities of experience to it, but that also contrasted its motor-dominated culture. This was how, over March-May 2012, he came to cycle from Perth to Adelaide.

As Nick peddled towards the moving horizon over his two-month cycle, his DoNation supporters, who were able to join him in spirit with their own practice-disrupting pledges, could bolster their own motivation with the knowledge that Nick was probably going to be having a harder time of it.

It was a warm late-summer day as I set off on my bicycle from my grandparents’ place in Perth, Western Australia.  Adelaide, my destination, was just over 2000 miles of asphalt away.  As the temperature jostled around the high thirties, I was aware that there were warmer days yet to come.

My grandparents were not there to see me off that morning – only a week before they’d boarded the Queen Mary II on a cruise around Australia and up to China.  An uncle of mine, however, who lived not too far away offered to turn up early and take some photos of me with my loaded bike.  It might spoil the illusion to tell you that after he headed back home I then got off my bike, and had breakfast before my actual departure.  But this was how I was to take my leave of my home city, locking the front door from the inside and then lowering the garage door as I ran out underneath it all the while hoping I’d not forgotten anything important inside.  I wasn’t due to return to Perth before heading back to the UK, if I had left anything behind then there it would have to remain.

As I peddled up to the crest of my first hill, only twenty meters from my start point, I could see that my cycle computer wasn’t ticking over.  It had been working several days before during my last ride.  I pulled over onto the pavement, but despite my efforts at poking and prodding the thing it refused to work.  It was disappointing, but there was little I could do and so I pressed on.  “No worries!”, as they say.  Now thirty meters from my start I turned the corner to coast down the hill.  I’d never ridden with front panniers on before and, as I gathered up speed, I could feel a strange wobble coming from the front forks.  Something was up with the pannier bags, although I wasn’t sure what.  At certain speeds they had the stability of shopping trolley wheels.  I didn’t know what to do, and as I was due at my cousin’s place south of Perth in several hours I tensed my arms (which did help a bit) and decided I’d deal with it later. Not even half a mile in to a 2000 mile cycle I’d not exactly made the best start.  I was determined, however, that everything would work out.  Anyone who passed me by, I imagine, would have noticed a visibly happy, if slightly wobbly, cyclist whizzing along.  So excited to be taking on something so far out of my general comfort zone I sung (largely, but not entirely metaphorically) my way through the city.

Several hours later I’d almost cycled the approximate, if modest, fifty kilometres (31 miles) to my cousin’s place in Medina, just south of Perth.  As I made my way through Medina in search of my cousin’s place I was aware that day one of about sixty was drawing to a close.  At the time I found it difficult to imagine that much further down the line I would be cycling my longest day, which at 185km (115 miles) would come to more than three and a half times longer than today.  I’d not done any training for this cycle and had read it was best to start out slowly, building up distance and confidence as your legs got used to it.

My cousin, Rebecca, her partner Luc and their kids all greeted me warmly.  Before dinner Luc drove me down to the closest bicycle shop where I managed to haggle a slightly cheaper price on their cheapest cycle computer to replace my stubbornly in-operational one – this, incidentally, was another reminder of the strength of the Australian dollar compared to my British Pounds.  And after a bit of quick research on the ‘pannier wobbles’ following dinner, a few adjustments to the placement of the bags on the rack made a huge difference.  Now with a working cycle computer, a stable set-up, and an amazing dinner inside me, I really now was ready.

You can see Nick’s Do Page, it’s never too late to sponsor him!

One thought on “Across the Outback – part one”