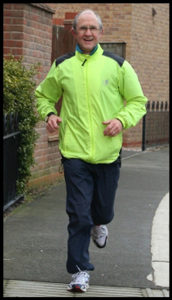 Despite originally thinking they were ‘too old’ to take part in a running race, Geoff and Sandie are now well onto their second Lincoln 10K. We caught up with Geoff to find out about their intense training regime and The DoNation’s impact on their friends and family.

What inspired your decision to sign up for the 10K?

We first did the Lincoln 10K two years ago. Sandie’s office mates asked us to join them in running it. Our first reaction was ‘Us? We’re too old! It can’t be done’. We then found out there was a sweep car that went at 3 miles an hour around the course – we could walk faster than that! So we decided to sign up.

But you’ve run before, right?!

As it’s the second time around, you’ve probably developed a slick training schedule.

I’ve been to the gym three times and swimming three times in the last month. Oh, and I’ve done a bit of jogging.

So what made you get sponsorship through The DoNation?

When you do a run or a sporting challenge, people are surprised if you’re not doing it for sponsorship. So it seemed appropriate that we get friends and family involved. We don’t like the idea of friends giving money for something we’ve done, but we do like the idea of people doing actions for the environment. Hence our choice of The DoNation.

Have you been impressed by the effect of people’s pledges?

A lot of our friends are involved in Transition Lincoln so they tend to already be quite conscientious. However I’d still say they’ve committed themselves to significant steps beyond what they’re already doing and changing their lifestyles.
It’s great the way The DoNation is habit-forming. My daughter has taken the pledge to eat more veggie meals. Definitely a significant step!