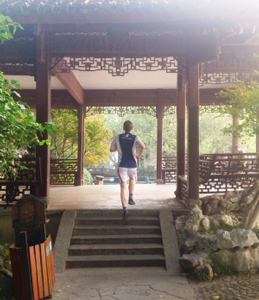 Shem’s impressive training regime has inspired friends and family to take on some pretty exciting pledges – even a website for Start Sharing. He tells us how The DoNation has engaged his supporters to change their habits and how he fuels his training with peanut butter granola bars and tasty-sounding halloumi bread…

A bit about your challenge:

So Shem, why did you decide to run the Leeds Half-Marathon?

I’ve spent the last 4 years in Leeds and love the city and the people here. As I’ll be leaving this year I thought running the Leeds Half-Marathon would be a great way to say goodbye.

I suppose this event follows a long history of running…

Does running around a football pitch count?

Not really! So has the training been hard work?

The first thing I did was to download some training programmes for beginners. But in the end I ignored most of that and just listened to my body. The main bit of advice I took was to include one long run a week with several additional shorter ones and to build up slowly adding 10% a week.
Since I started training I’ve had to travel quite a lot with work so the training has continued in the smog of Beijing, on the sandy beaches of Hong Kong and in the freezing streets of Vienna. However, mostly I’ve been plodding the streets and parks of lovely Leeds.
Recently I’ve been reading Born to Run by Christopher McDougall and I’m now at serious risk of starting to run for FUN!

Shock horror! When you tell people you’re running a half-marathon what do they do?

They’re curious…and slightly shocked. Given that we’ve evolved as highly efficient running machines I think that says something about the modern lives we lead. Before I started training I thought my lungs would explode if I ran for more than 30 minutes – they haven’t, yet!

And then you got involved with The DoNation.

The DoNation provides a really exciting way to engage people and show them how they can make a difference on a personal level. Because the DoActions are all about changing habits, I think the impact can go much further than just giving a financial donation and the effects can multiply as Doers tell their friends about what they’re doing. It’s also a great way to get past ‘charity fatigue’ where friends feel obliged to contribute to another cause just because you’ve asked them without them really engaging in the process.

Since you work in low carbon research, are all your friends pretty green anyway?

I’ve realised how hard it can be to get people to change simple behaviours. Several people who are well aware of the issues of climate change and living sustainably have said they wish I’d just asked for a fiver instead. Also I’ve had some great engagement from friends who don’t work in the same field and who were less aware of the issues.

What sorts of things have people done that’s impressed you?

My supervisor pledged to cycle to work for two months and a friend has made a cool website to start sharing things. I also have a particularly conscientious friend who wasn’t able to find a single DoAction that he’s not already doing – we need some more actions, DoNation!

Any top tips for other Doers trying to raise sponsorship?

Use as many mediums as you can to tell people about what you’re doing: Facebook, Twitter, posters, training updates, workplace emails and repeat the message lots of times. Then you’ll probably need to follow up a lot of people by speaking to them personally to give them that final push.

Definitely peanut butter, it’s one of the major ingredients in my homemade energy bars, perfect for those long runs!

Nice choice. Great to chat to you – we’re wishing you lots of luck for the 12th of May!

On the day, Do say: is that a samba band I hear?
On the day, DoN’t say: You know the first 10km is all uphill?

And keep showing Shem your support by sponsoring him on his DoNation page.