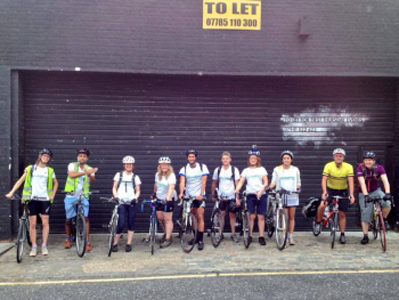 Last Saturday I did an all-nighter, staying up until 10am after an intense night of fun. We’d started the evening in London Fields and the party was huge – roughly 2,000 of us. However, instead of standing in the usual midst of thrift-shop-mannequin hipsters, my fellow comrades were each equipped with energy bars, a helmet, attire varying in degrees of appropriateness, and a bike.

This was my first Dunwich Dynamo! An overnight cycle ride from London Fields to Dunwich – a beach in Suffolk 120 miles away.

I was cycling as part of a team in support of The DoNation, a start-up that replaces sponsorship of cash with sustainable acts. The DoNation aims to encourage more sustainable behaviour, as Hermione, the inspiring DoNation founder, believes that “if we want to change the world it will happen through actions and not money”. And rightly so!

In total we raised 121 pledges, saving 6,264kg CO2 , equating to twelve flights from London to New York! On top of that:

1,200 miles were clocked up from by people pledging to ‘On yer bike‘

Mount Everest was climbed a total of 1.3 times from those pledging ‘Step up‘!

The realisation of how large the DD run is hits you when you get to London Fields. Two thousand cyclists participate and the range of Dunwich riders is a big and colourful one. The main type of cyclist was the lycra-clad athlete with uber-light bikes, two bottles of water, food sello-taped to the top bar (for extra efficiency), and buns of steel. But allow me to present:

·         The Girls in Dresses: vintage clothing and leather satchels

·         The Non-Aerodynamic Ones: touring and hybrid bikes with food-laden panniers (I belong here)

·         And finally… the Gentleman: a stylish, elegant gentleman with combed back white hair, khaki shorts, a flannel shirt and moccasins.

The DD is barely organised. Southwark Cyclists and London Cycling Campaign get involved in providing the coaches and maps, but that’s about it. You simply turn up and ride. No marshals, but plenty of friendly and supportive people along the way.

We were standing around for about 30 minutes sorting out coach tickets and maps, and then quite suddenly we were moving in a hive of riders, which flowed onto the streets and took us through the slow exit out of London Fields. For the next 15 hours I would be entirely amongst cyclists, hardly going a few minutes without being passed by or passing a fellow DD runner.

Cycling out of London was fast and exhilarating. All you see is a long, winding snake of people on road bikes, hybrids and even bamboo bikes! It was definitely the scariest part of the ride due to all the cars. Polite drivers who thought they’d give way to a few cyclists were left in agony as they had no idea how long they’d have to wait until all cyclists had gone by. The Dunwich Dynamo had truly taken over and traffic jam stacked up as we whizzed by.

Lots of groups hit their first mechanical failure just outside of London due to the epic pothole, still being discussed on the Facebook group. An hour and a bit later we were out in the country side and once it got dark we came rolling around the corner to find a conference of cyclists at the first village pub!

The atmosphere was great. People drinking, smoking and loading up for the long night ride ahead, exchanging stories and laughing. As my group was a leisurely bunch possessing a healthy appetite, we were to stop at almost all the food stops along the route: the second village pub, the big village hall for dinner, at the top of The Hill That Shall Not Be Named for snacks, the sausage stand at 80 miles, and the free tea and coffee stall at about 95 miles.

Cycling through the dark is a mad experience. No cars and the whizz-and-whirring sound of bikes makes you feel like you’re in the midst of a colony of bees. Often we would shout “car back!” only to be passed by a super fast rider with very bright lights.

I thought that finding our way would be challenging, especially as the map wasn’t a geographical one but merely a list of directions and descriptions. It turned out to be quite the contrary. For most of the route we were guided by the flashing red lights of other riders ahead of us. It’s fascinating! Who knows the way? Is there a group leading the way and checking directions? And who were the candle fairies who had kindly laid out candles in some villages to guide our path? The route was so well ‘guided’, we only had to take out our map during the last 20 miles.

Whoever said the route was flat may have been telling porkies. Or was just really fit. Or even unintentionally misleading! After about 70 miles all the lovely rolling hills start looking like Everest and K2, taking their toll on knees, bums and joints. But they give you the excuse to pork out on digestives and after all, you do gain a great sense of accomplishment. By the end you start embracing the challenge though your knee is cryingStaaahp, no!, your determination to defy gravity miraculously surges after 6am and you steam up that hill leaving a trail of huffs and puffs and emerge despite the fact that your average speed was 6 mph.

I only realised just how far 120 miles is when we stopped at the sausage van by the lake at 5am. By then we had experienced two punctures (on the same bike), had lost sight of five other riders in our group, and had eaten all the flapjacks. Everyone hits their promised ‘low’ moment and I experienced mine shortly after the sausage stall. The cold morning dew made me shiver and I felt tired for the first time since I started the ride. It’s good to know what perks you up, so I belled out the tune to the opening scene of the Lion King and within the hour I was all warmed up as if on the Serengeti in Kenya. I was promptly met by a severe, “Pipe down!” from a perturbed local.

The last 20 miles were the most gruelling. All night long we had cycled against a head wind, which seemed to get stronger. My knee began to complain a little but the countdown had begun! Spirits lifted at 15 miles, just as the physical struggle really set on. Our legs felt like jelly, every hill was a killer and the coherence of our chat dropped dramatically. It was around this time that we started seeing people on their way back from the beach. These were the ones leading the pack, driving the head of the snake of cyclists all the way from London to Dunwich! They had made it to the beach, slept, eaten and started off again looking fresh as daisies.

Then we passed the first DUNWICH 7 MILES sign and dang, were they long. Up and down, through narrow roads. Many more cyclists coming our way, and when the first coaches full of cyclists passed us we knew were close. Suddenly two groups of mothers shouted on words of encouragement and fellow cyclist Georgie and myself completely welled up with emotion when we realised just how close we were to completing the hardest thing we had ever done.

We rolled into Dunwich beach, facing a massive crowd of cyclists eating, queuing to the get the coach and others just coming back from a dip in the sea. It was amazing – we had finished! All of a sudden I felt much better and putting the bike down to walk was a great feeling, knowing that I didn’t have to get back on it for a while. Some of us braved the cold water, and we spent an hour on the beach before getting on the coach back to London. Once we set off all of us fell instantly asleep. I suppose 13 hours of cycling has that effect on you.

The sense of accomplishment from doing the Dunwich Dynamo is huge. It feels good and when I think about The DoNation’s mission, it makes sense to me. There is only so much satisfaction you can get from clicking on a button to transfer money from your account to a charity. This is the only interaction you will have as a sponsor. By pledging to commit to cycling more, buying seasonal food, or switching to a renewable energy supplier, The DoNation encourages you to actively enforce change by making small but significant changes to your lifestyle.

I’m probably going to do it again next year. Even though it was hard, I’ve already erased most negative memories and am clinging onto the high ones!

One thought on “The Dunwich Dynamo – A First Timer’s Story”