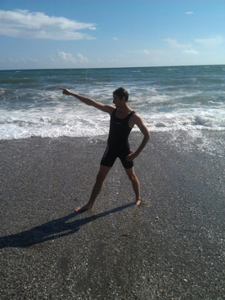 Hever Castle triathlete David Jacoby has stormed to the top of the Hever hub with nearly 50 pledges to his name, and with still over three weeks to go!

Dismissing any notion of the ‘Hare and Tortoise’ approach, this Doer has the finishing line in his sights, and is determined to lead from the front!

Here’s a little insight into how he’s managed to sway those family and friends into supporting his triathlon challenge.

What has the response been to asking for sponsorship?

“A lot of people have told me they really like how original The DoNation idea is, and because of this I’ve had much more of a positive reaction from people I’ve targeted.

Who have you asked?

“Mainly friends and family, and they’ve been really supportive with it. I think they’re more passionate about the environment than they knew!”

Do you think people prefer that you’re asking for actions instead of cash?

“Definitely. It’s been a great way for people to get involved without costing them any money.”

And how do you know that they’re sticking to their pledges!?

“I can only go by what they say! But I know they’re enjoying it. Some of them have pledged more than once, and they know by committing themselves to it they are reducing their carbon footprint.”

Click here to support David in his challenge, and keep this ‘Hare’ out in front!