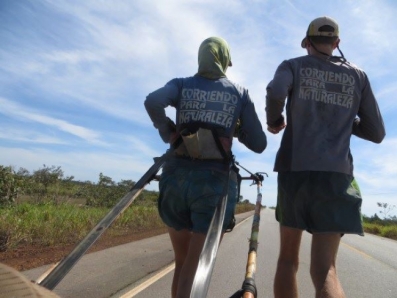 Hermione and I are squished into a small, dark diary room off Tottenham Court Road, Skyping with Dave and Katharine Lowrie who are on the other side of the world, on a boat in Uruguay. It’s really rather awesome.

Our Doers of the month have just completed a 6,504 mile run across South America. Yep – they actually ran the entire length of South America.  And now they are on a rickety boat in Uruguay preparing to sail back to England. We dive straight in…

So firstly, how did you end up on a broken down boat in Uruguay?!

Dave: After quitting my job at Accenture, we came to South America to work in nature Conservation. But we didn’t want to fly here from the UK, so we bought this boat and sailed. Then we had this idea that we liked running and we could create this metaphor for doing little things step by step and combating all these horrible, grizzly climate problems that we have. So we left the boat here for 15 months whilst we did the 5000 mile project.

Why did you decide to do this challenge?

Katharine: We really wanted to raise awareness of conservation – of protecting the places we care about, and we thought: what better way to do that than running through them and actually talking to local people?

“People kept saying we were going to get eaten by jaguars”

What were the best bits about your challenge?

Katharine: I would say wildlife and wild land, that’s what we were running for, that was the reason we were there. It was funny because whenever we were down or fed up, tired or hungry, it was wildlife that got us through. We saw so many amazing things!

At one point in Brazil, there was this rainstorm coming towards us and I was looking in its direction and this rock caught my eye. It looked like it was moving?! Suddenly I realized it wasn’t a rock at all,  it was a giant ant eater! And it was a huge! With a long nose and bushy tail snuffling for termites!! 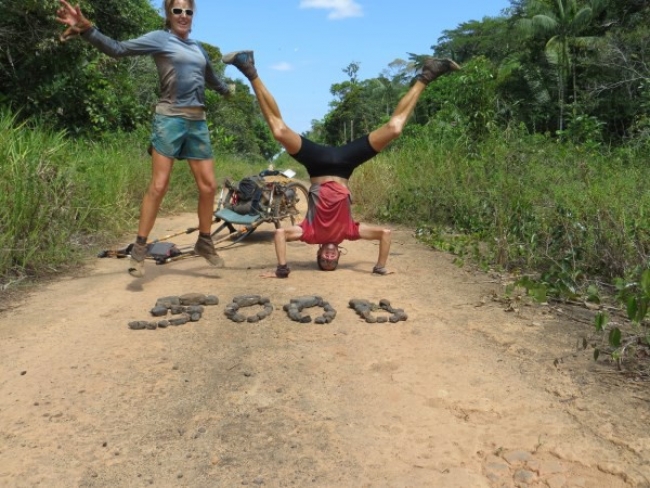 It sounds amazing; were there any bad bits?

Katharine: To be honest there were some quite scary parts. We were really scared about running through Venezuela after the Amazon. We were basically told not to go there. The towns are run by the Mafia so there is a lot of crime and it can be really dangerous, but there was no other way through.

We were basically running a marathon every day and hiding in bushes to get through these towns. People kept saying we might get eaten by jaguars or snakes but it was actually the human element that made us feel very exposed – I mean two gringo’s running down the road with trailers?! Actually I think we were so odd and weird that people didn’t really know what to do with us!

Dave: There was definitely a bit of soul searching time at the beginning – we were in Patagonia, and it was winter and there was no one around and we kept thinking, why the hell are we here? Can we run this far? What the f*** are we doing?!

That does sound rather scary! In line with your ‘small steps’ approach, you decided to ask people to support your run by making small steps of their own, through The DoNation. How did your friends respond to this request?

Katharine: People were very positive about it – they found it a very new, a very novel idea. Lots of them said they hadn’t foreseen how their little daily actions could help our planet. Quite a few people took easier actions than we would have liked – but it’s all useful!!

Dave: I think there was a genuine novelty factor to it; they really hadn’t thought you could help someone without putting money in their account. It does bring it quite close to home as well – when talking to some people about sponsoring us, they were like ‘Wow! We actually do something as well?!’ The idea made some people feel uncomfortable at first, but they soon got into it and some got the whole family involved!

Katharine: It’s also been fantastic to have the actions measured. That really was major for us – to be able to see the impact people were making. 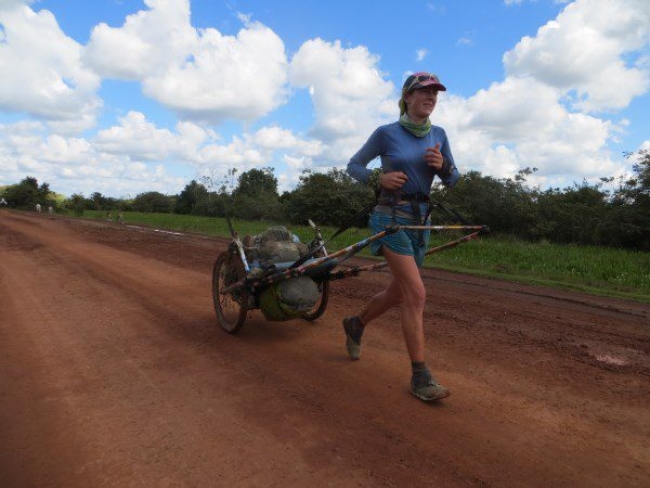 Did any particular pledges stand out to you?

Katharine: Absolutely, a friend of ours changed his electricity supplier to Good Energy, and that is a major step and he just went for it!

Dave: I fear I may have been responsible for some future domestics as a friend ditched one of his cars and pledged to lift-share with his wife every day for half an hour, so there may be some fall-outs from that one!

Oh dear, we hope not! What impact do you think your challenge and raising through the DoNation has had?

Katharine: Every single county we went through, there was an impact on grazing, and one of things we thought people could do is to eat local. If people could just try and support local people and producers in the UK, then that would be a massive thing straight away.

Dave: Yes, we could basically see the impact of our European lifestyles everywhere we looked and we just thought holy s*** – it’s not just the South Americans that have caused this impact – it’s us.

What would you say to someone else thinking of doing a challenge on The DoNation?

Dave: If there is any chance of succeeding, have a go!

Dave: Yes- maybe not so long, but some sort of running expedition.

We definitely hope to see them off exploring again! What an incredible journey, you can still sponsor them here.

Relaxing at last in the boat