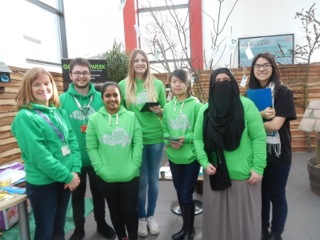 We really get a thrill from working with Universities as it provides an incredible opportunity to engage with students at one of the critical times in their lives. They are often living away from home for the first time and forming the habits that will stick with them for the rest of their lives. It also gives us the opportunity to engage staff at the University alongside students, helping to build a more sustainably minded, better connected community. We were then, over the moon to be able to run a programme earlier this year with the University of Central Lancashire (UCLan) and the Students’ Union. Here’s the lowdown on what we managed to do together and why they chose to work with us.

Update: We’re incredibly excited that UCLan have been nominated in the student engagement category for the Green Gown Awards 2015.

We’re doubly excited that they were also awarded a Green Impact Gold Award and the Environmental Innovation Award at last night’s 2015 NUS Awards. We’re very proud to have been involved in their achievements this year.

The University and Students’ Union were running their annual Green Week and had been awarded funding from the excellent NUS Students’ Green Fund, allowing them to take their campaign to the next level. They wanted to encourage behaviour change, but were reluctant to invest in a new campaign without the ability to really measure its impact on individuals long-term habits. They were also looking for a unified call to action that could go across all of their green week events, so that they could turn inspiration into action. Previous Green Weeks had used a pledge tree and they wanted to build on this idea of pledging using a system that will follow-up to see how many people stayed true to their word.

Emma Bartlet of the UCLan Students Union said of the programme: “Do Nation allowed us to tie a lot of different student and staff activity together across and beyond our Green Week. It gave us a mechanism to measure if our Green Week focus here at UCLan and see if behaviour change was being triggered. The final report meant we could clearly show that Green Week had made real pro-environmental change take place in the lives of our students.”

During Green Week 2015 attendees were asked to pledge on the Do Nation platform to make small, daily, habit-forming lifestyle changes that are good for the environment but also help to create healthier, happier and more productive lives – things like walking up the stairs instead of taking the lift and drinking tap water instead of buying bottled. Teams of volunteers went around the campus and attended Green Week events, asking staff and students to make pledges straight onto the Do Nation website through iPads.

During the month, 267 people made 403 pledges to try new something new. Of these pledges 35% have been confirmed to have been completed and an incredible 100% of those said they intended to continue with their new behaviour. Over the course of a year, these new habits will save a brilliant 11 tonnes CO2 – that’s the same as is emitted by 25 flights from Manchester to New York.

But while CO2 is important it isn’t an end in itself; we take pride in proving the range of wider benefits that come along with our Do Actions. As you’ll be able to see in the chart below, UCLan achieved some pretty impressive all around stats. 67% of those surveyed said their pledge had increased their sense of wellbeing and 46% said their pledge had helped them to get fitter or healthier.

Beyond the environmental and personal benefits driven by use of the Do Nation is the increase in engagement between the staff, students and the University, as the stats below show.

But don’t just take our word for it…

This is what some users at UCLan said about pledging on the Do Nation: ‘Totally nailed it and will continue to do so. Not only is it friendly for the environment but it helps cut down the cost of electricity bills as well.’ Karina Sultan, Lights off.

‘Absolutely loved doing this!!! It really made me think about the amount of plastic we as a society use, I have changed what I buy because of this’ Steven Seymour, Fantastic unplastic.

‘I have developed this new habit of recycling waste because of this pledge and have really started understanding it’s important for saving the environment. I will definitely continue with this pledge’ Suruchi Pradhan, Tintin.

We’d love to hear about how we can help your sustainability plans to take off in the new academic year.

3 thoughts on “The DoNation and UCLan – The Case Study”